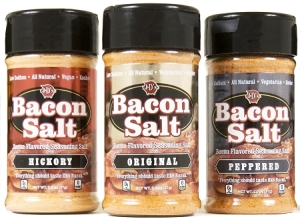 This is the story of Bacon Salt or J&D’s Down Home Enterprises – the most successful Seattle start-up that you have never heard of.  Or maybe you have.  In 2007, Justin Esch and Dave Lefkow developed a zero calorie, vegetarian, kosher certified bacon flavor seasoning and decided to start selling it on the Internet.   Within months, they had a significant business making hundreds of thousands of dollars in 2007 revenue.  Today they are at a run rate of millions of dollars in revenue.  How did they do it?  Social media, particularly Facebook.

I met with Bacontrepreneur Justin Esch several weeks back where we talked about their strategy and how they developed a grassroots following for Bacon Salt through online guerrilla, Seth Godin-style Purple Cow marketing.  Here is Justin’s recipe in launching a physical product on Facebook:

They have basically replicated this strategy on MySpace as well.  Their business is doing extremely well.  Bacon Salt is knocking on the door of distribution through major grocery retailers and they are slated to appear on QVC at some point in the near future.

What’s even more amazing to me is that they have bootstrapped it 100% to date.  Now that’s what I call a story of two Seattle boys done good.